With the beautiful traditional Spanish ceremony in Cadiz Cathedral ending, we were off to the vineyard for the fabulous reception! The wedding reception was held at a vineyard and winery named  Gonzalez Byass in the town of Jerez de la Frontera, which is in the province of Cádiz, Spain. 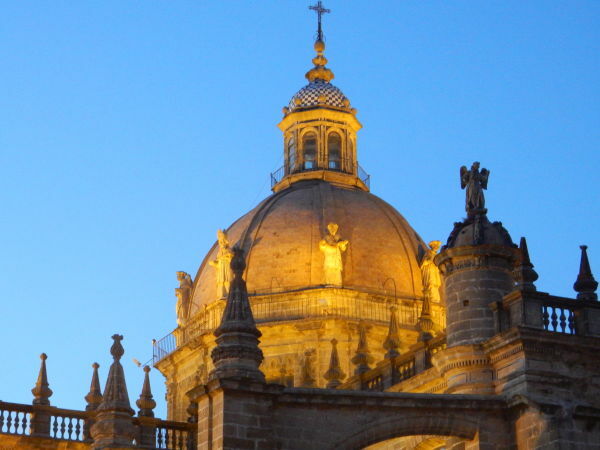 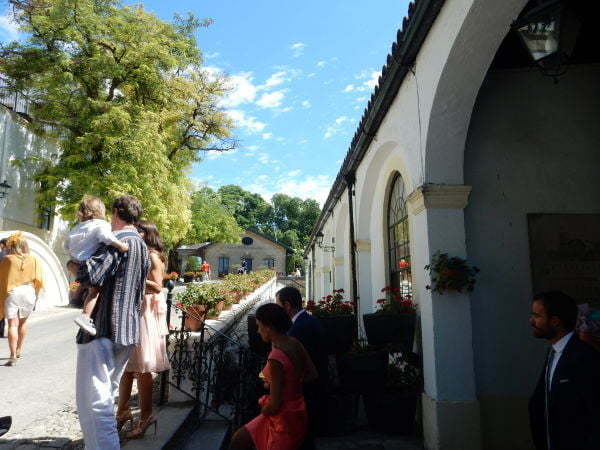 guests arriving at the winery 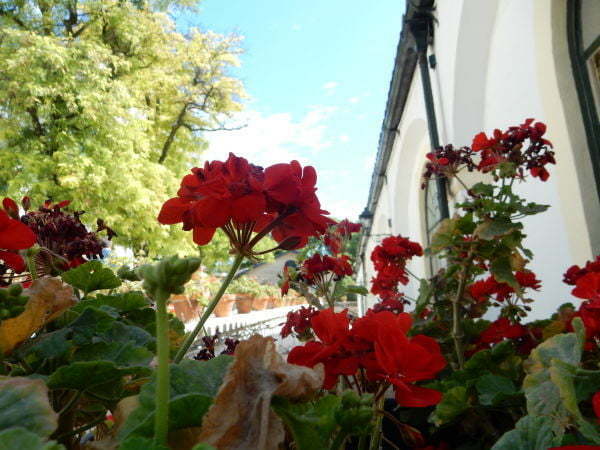 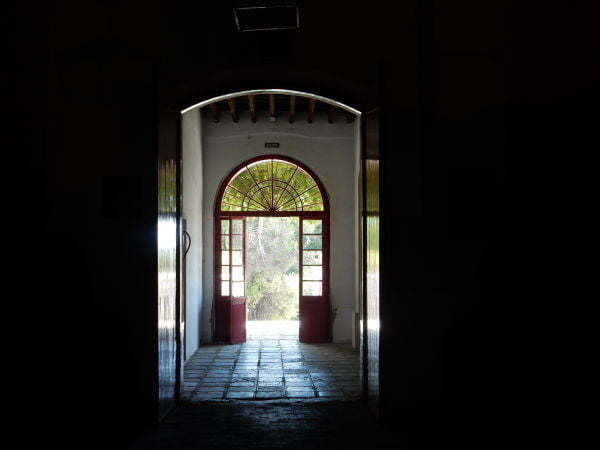 The winery is named after Gonzales and his family who first began producing sherry after he was encouraged by his Uncle Joe, “Tío Pepe” in Spanish to produce wine. The Gonzales family has 6 vineyards across the Spanish countryside, this particular location in Jerez is named Bodegas Tio Pepe, again after Gonzales’ Uncle. Gonzales later created a sherry also named after his uncle, which the winery still produces today in honor of the man and his legacy. Today the winery is still family owned and operated, by the fifth-generation of the Gonzales family. 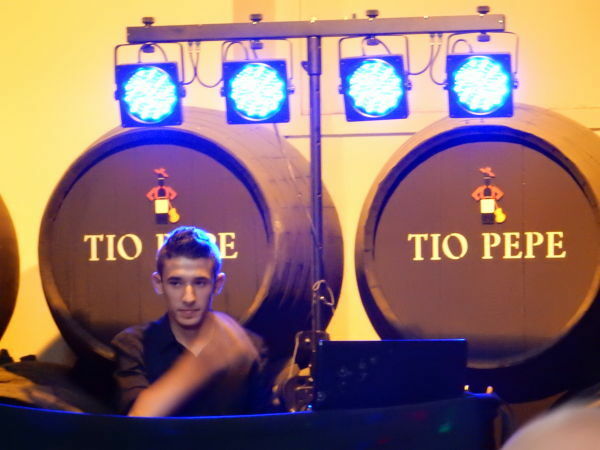 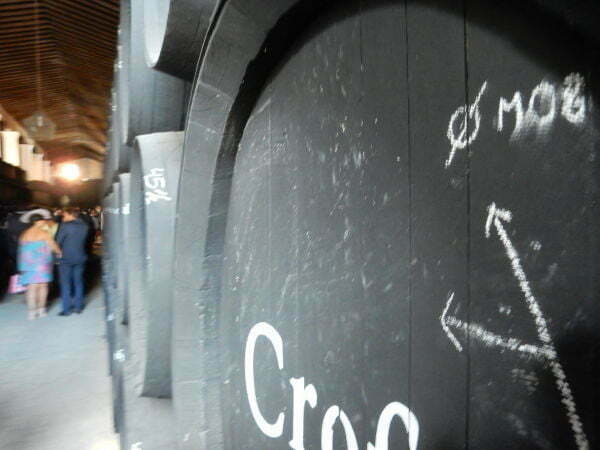 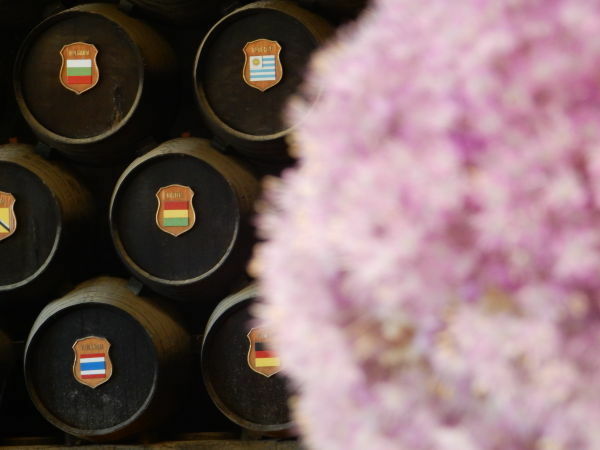 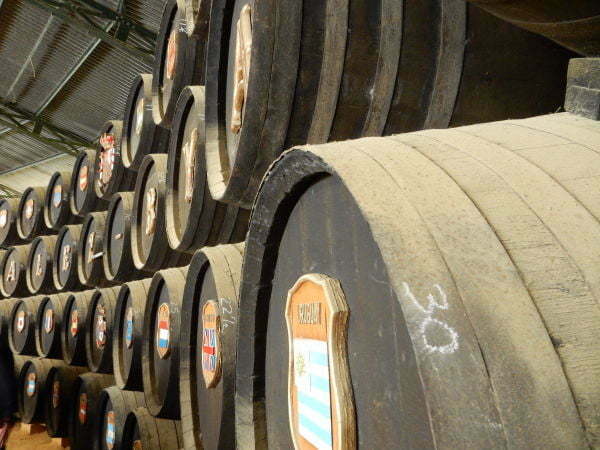 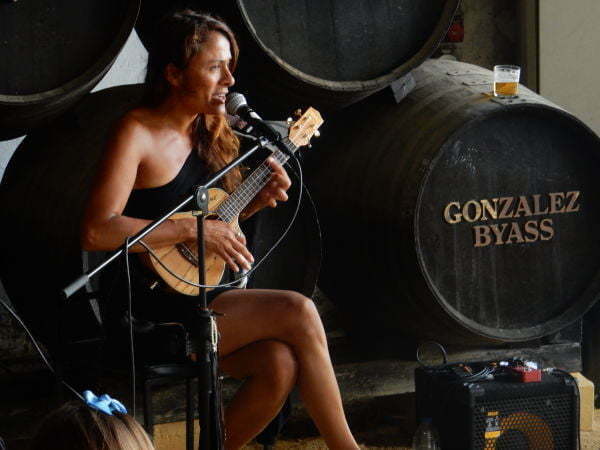 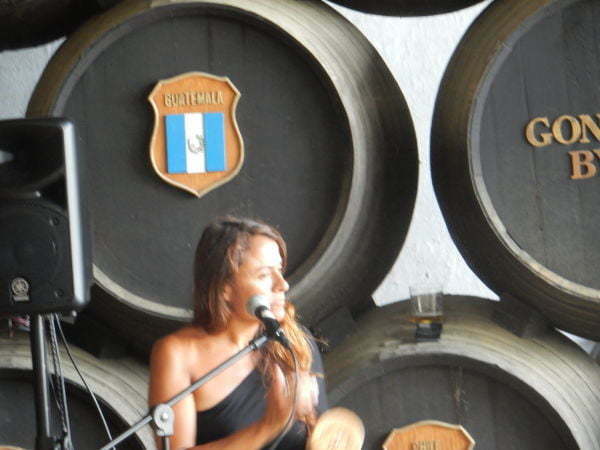 Once we entered the salon, I literally felt as though I was transported to De La Vega’s House from the old Zorro movie where everyone was having a lavish dinner party. The Spanish style architecture, the barrels of wine, the food and music, the decor it was literally as though you were in a movie and was such an amusing point to me. I kept walking up to my friends and asking them if the scenery and event also reminded them of De La Vega’s House from Zorro, they all started to laugh at me but then completely agreed! 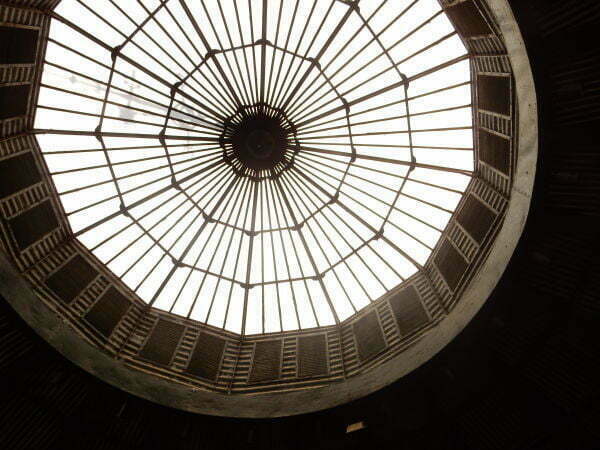 First, they brought us to the wine cellar for wine and tapas that servers were passing around as guests got into the party spirit and danced and celebrated the bride and groom. The DJ tried to play an international mix of music, but the guests seemed to be really into their Spanish culture and truly enjoying the moment, as they kept requesting traditional Spanish songs to be played. It was lovely to see a group of people so proud of their culture and utilizing the moment to truly celebrate. 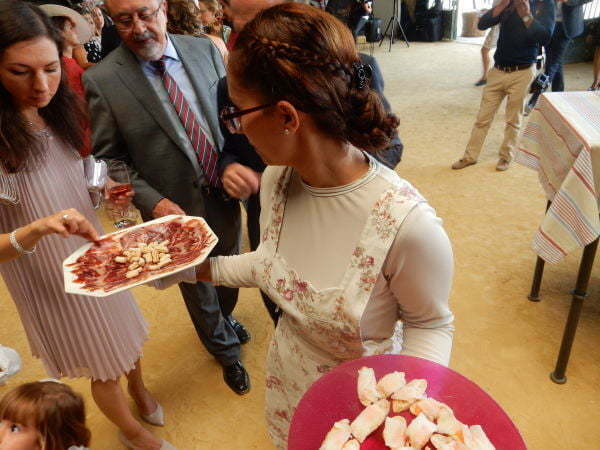 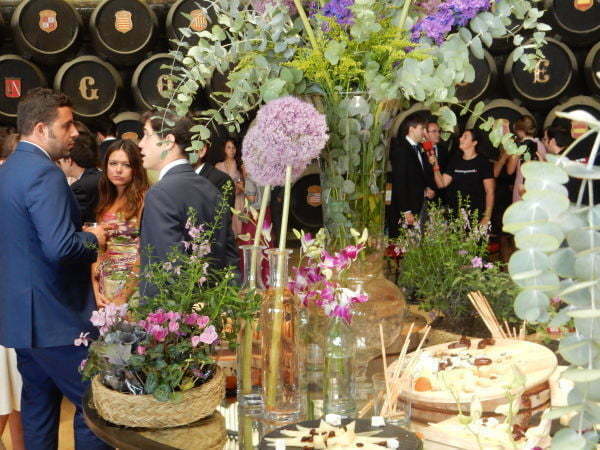 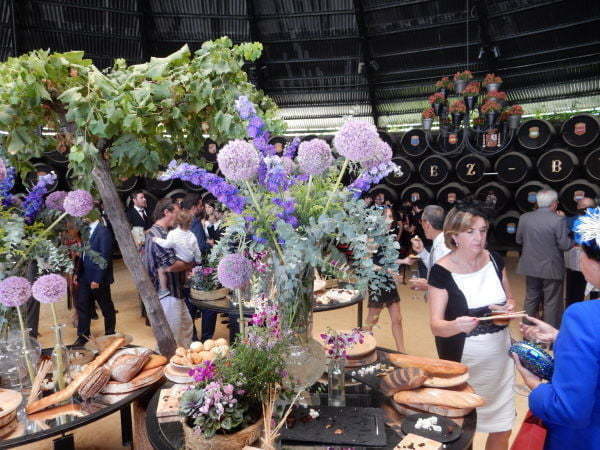 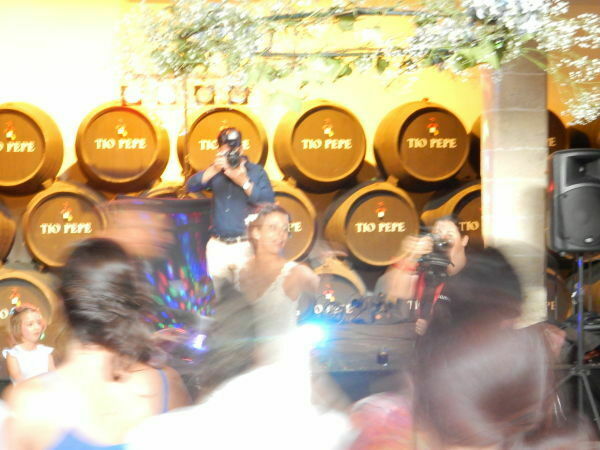 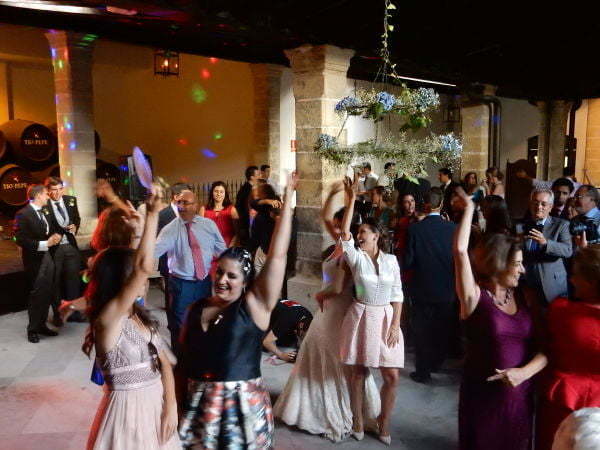 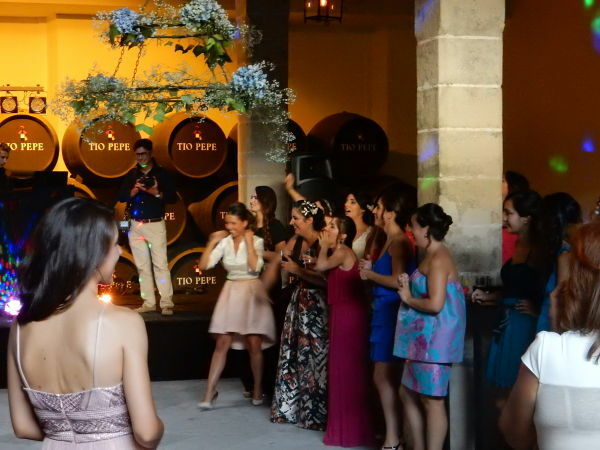 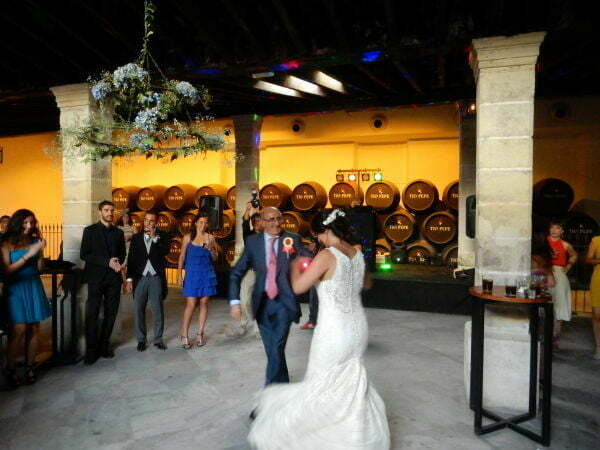 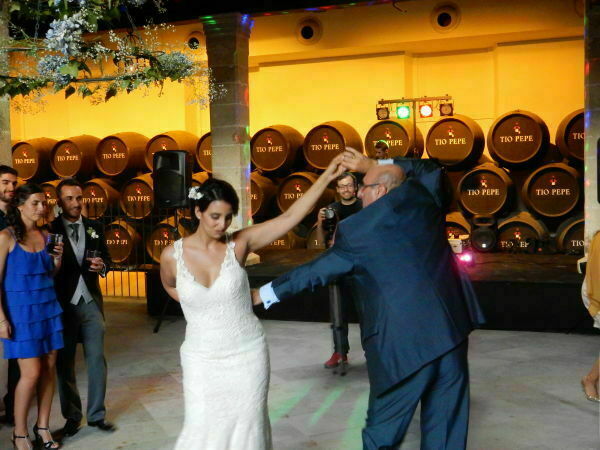 The wine and tapas all continued with the traditional Spanish theme of the evening and everything was extremely enjoyable and quite delicious. And just when you thought you could not possibly drink or eat any more, they escorted us all to the reception area for a sit down late afternoon lunch. 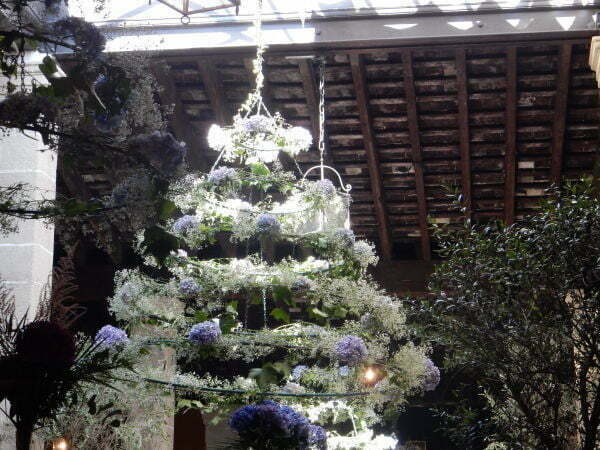 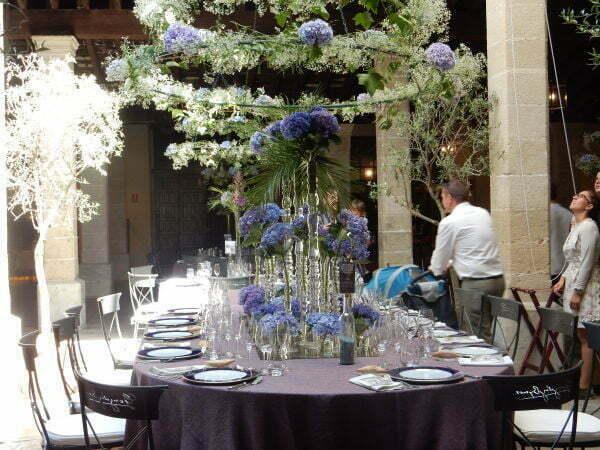 in the salon area, the De La Vega theme continued!

The lunch was a three course meal complete with different types of wine and champagne and that were individually paired with the food. The meal began with a cold shrimp salad, followed by a sirloin cut of veal in truffle sauce, and concluded with a very Spanish dessert — a Milhoja, which is layers of puff pastry (the Spanish equivalent to Mille Feuille in French or Napolean in English), filled with a Spanish cheese and served with fresh seasonal berries, paired with of course the famous Gonzales sherry. Everything was absolutely delicious, especially the desert, which as you all know with my sweet tooth, was just divine and honestly one of the best desserts I have EVER had! 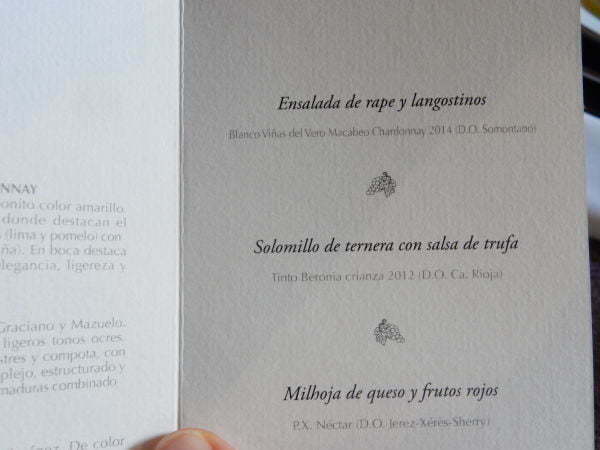 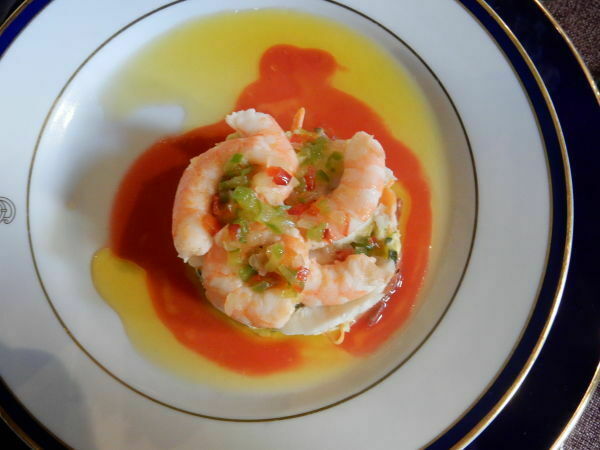 Throughly stuffed with delightful Spanish treats, it was time to sit back, relax, and enjoy the party. Each place setting had little party favors with the bride and groom’s monogram initialed onto it. It was great to catch up with friends I had not seen in a while and also celebrate the bride and groom. For me, it was a special experience I had never had before, a true Spanish wedding from top to bottom that was equally fun and elegant. Wishing the bride and groom many happy years to come, cheers! Drop me a comment below on what you liked most about the wedding. 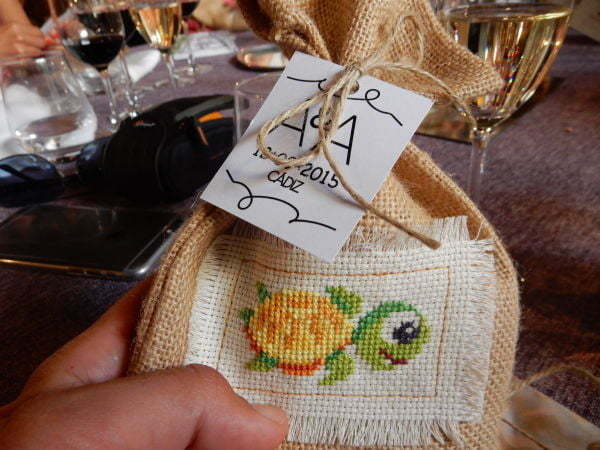 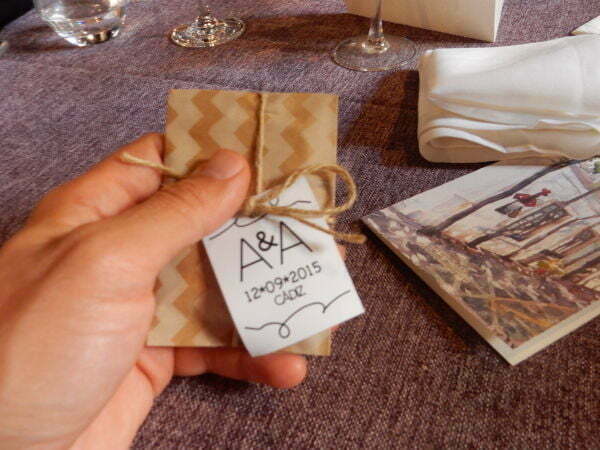 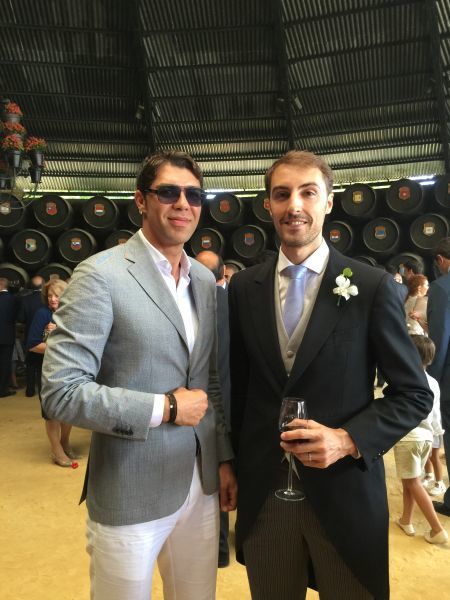