Day with the Roman Gods in the Correr Museum, Venice

On the afternoon of our visit to Doge’s Palace, we wanted to reflect on some Ancient Roman history by admiring the beautiful sculptures made by the famous Italian artist Antonio Canova. The Correr, Doge’s Palace, and St. Mark’s Basilica are all located in the same square– the Piazza San Marco in Venice, Italy. The good news is that a ticket to Correr Museum also gets you into Doge’s Palace, the Archaeological Museum, and the Biblioteca Marciana all next to one another. For more information on Doge’s Palace, tickets, and tips to save you time when visiting the Piazza, click here to read my previous post on the Doge’s Palace.

As you admire the Doge’s Palace, the extravagance you see all around you is a symbol of the strength of the Venetian Republic, under the rule of the new Doges. By contrast, the statues are a direct representation of Ancient Roman history and culture. To my surprise and sheer delight, I did not know I would be spending the day admiring these beautiful sculptures, and I was so pleased as I have a deep personal connection and lots of memories tied to the stories of these Gods, Goddesses, and great men.

Antonio Canova, is not only considered a great Italian sculpture, but also the best sculptor of his age in the world. Luckily, many of his works were here at the Correr Museum for us to admire. In 2015, a group of organizations founded the “Sublime Canova” Project, aimed at the restoration and highlighting of the many Canova sculptures which call the Correr Museum home. We first begin with the statues near the Doge’s Palace and then off to the Correr for Canova’s masterpieces. 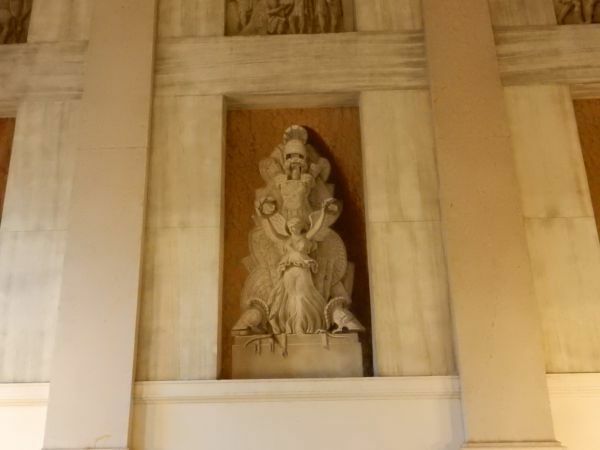 Do you recognize any of these statues or stories below?

If YES, which one is your favorite story? If NO, which one would you like to learn more about? Leave me a comment below with your answers.

From early childhood, I would read books about these legendary characters; my fascination with them and their stories has only grown deeper as I get older. I was so overcome with emotion walking around these statutes, that I was visibly elated; everyone walking with us in the museum was wondering what I was jumping up and down about. Some, particularly the children as you can see in the photos below, came to ask me what I was telling my friend in Persian about the sculptures, they were eager to learn the legends just like I was as a young boy. It was a very touching moment. 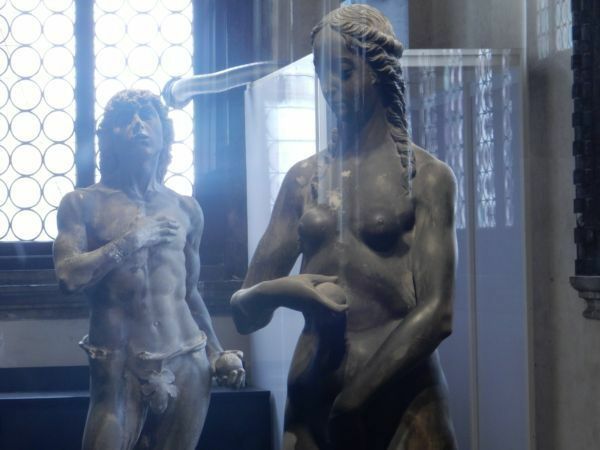 In the Piazza just outside of the Doge’s Palace is the Giant’s Staircase, Scala dei Giganti, the official entrance to the Doge’s Palace. There at the top of the staircase you see the colossal statues of Mars and Neptune, standing guard over their beloved city by the sea. As Neptune is the God of fresh water and the sea and Mars is the God of war and the most important of the military Gods in the religion of the Roman army, it makes complete sense that they would stand tall and proud to protect and defend their city. They also serve as a reminder of Venice’ dual power — on land (Mars) and sea (Neptune).

The figures do not have the most moving facial features, however they convey the concept of size and strength and both face the same direction, towards the main entrance of the Palace. On the right stands Neptune, gently holding a dolphin tail in his left hand; a visual representation of victor over vanquished –a reoccurring theme from this era of the Republic’s history. On the left stands Mars, young, bold, and only sheer confidence to guard him as he stands with the shield behind him at his feet, but naked and unarmed– reminding us all of his sheer power as the God of war.

The colossal size of the statues was intentional — they serve as a reminder that even with the Doge’s  power in Venice, no one is above the Gods; as they ultimately control all of us and determine our successes or punishments here on Earth. 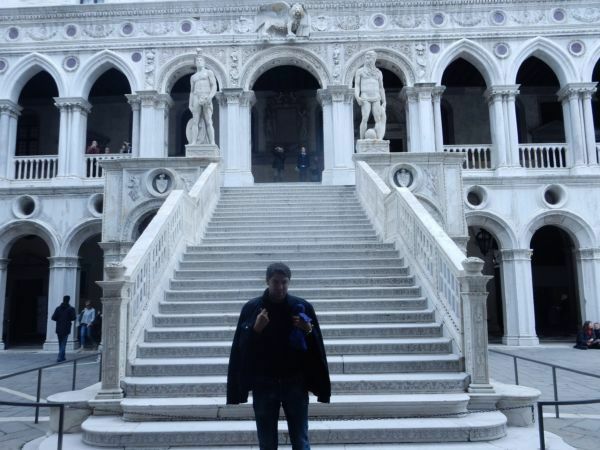 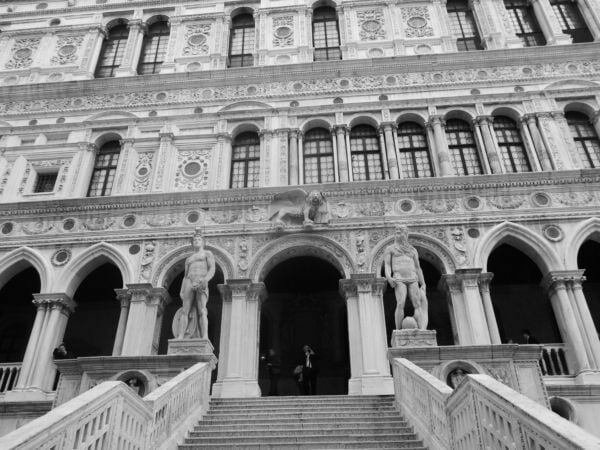 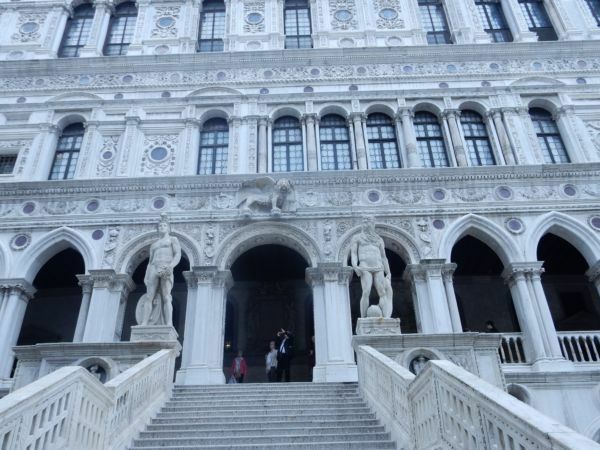 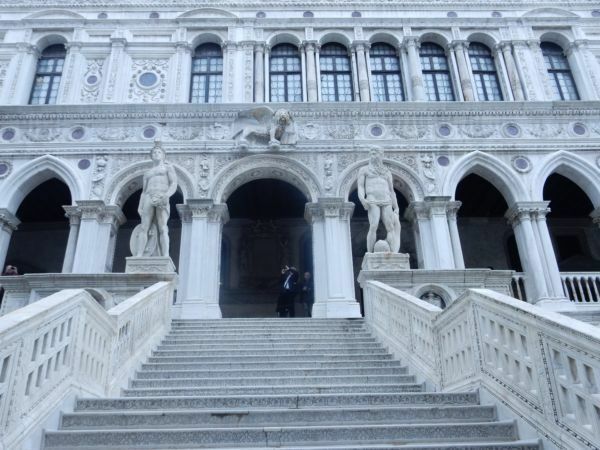 Past the Scala dei Giganti, Hercules and Atlas welcome guests to the entrance of the Golden Staircase in the Doge’s Palace. For me, these men were not just legendary giants of physical strength. We remember them for the countless obstacles they faced, fought, and overcame, so that they could live and we could hear the tales.

The second of the Twelve Labors assigned to Hercules was to kill the Lernean Hydra. A monstrous serpent with nine heads, the hydra would rise up and terrorize the countryside attacking with poisonous venom. Nor was this beast easy prey, for one of the nine heads was immortal and therefore indestructible. The serpent was so subdued at first, but then quickly wrapped itself around the giant legs of the hero. With his infamous club, Hercules beat the many heads of the hydra; but as soon as he smashed one head, two more would burst out in its place! With the help of his nephew Iolaus, they burned all 9 heads of the hydra, he then slit the beast open and dipped his famous arrows into the poisonous venom of the snake to later use against his enemies.

On the right is Atlas, crouching under the heavy weight of the starry sky. Atlas was a Titan, the second generation of divine beings that came from the Mother Earth (Gaia) and Father Sky (Uranus). During the ten year Battle of the Titians where the Titans fought the Olympians over which generation of the gods would have dominion over the Universe, the Olympians were victorious. When the Titans were defeated, Zeus sent Atlas to the western edge of Earth (Gaia) where Atlas was condemned to hold up the sky and the heavens for eternity as punishment. A common misconception is that Atlas was forced to hold the Earth on his shoulders, but this is incorrect. If you look at ancient art, you will see the globe is celestial sphere with stars and not the earth made of land and water, just like the yellow stars you can still see in the picture below. 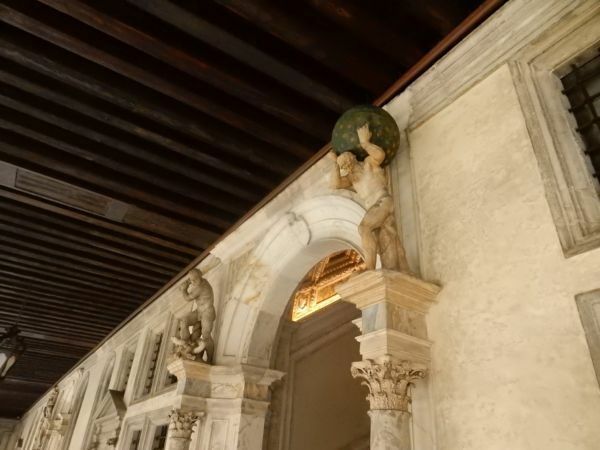 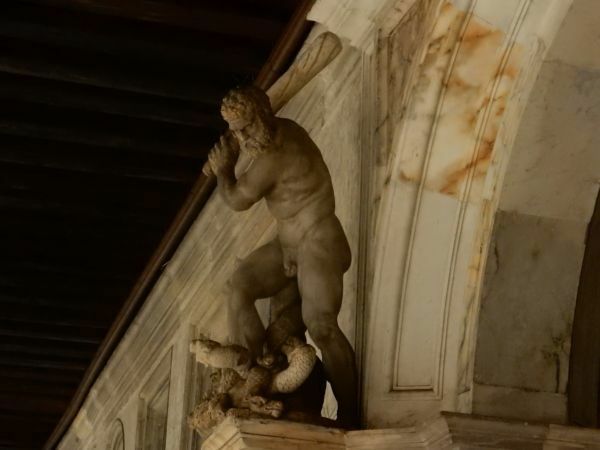 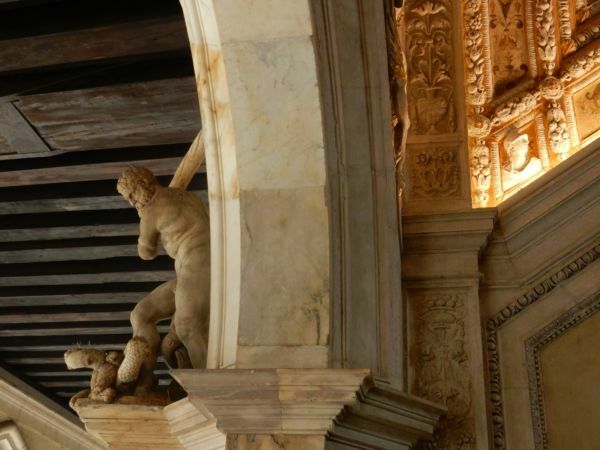 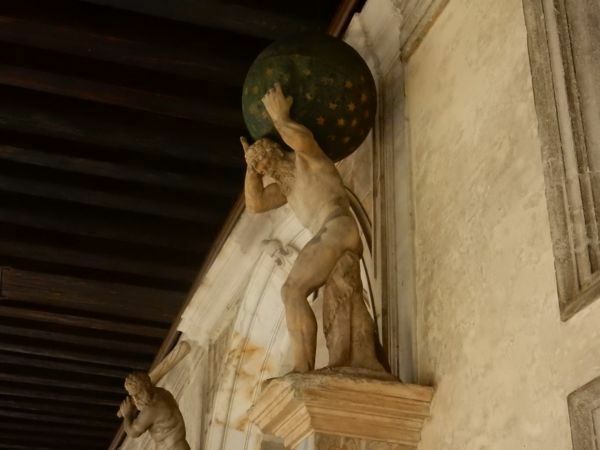 Icarus was the son of the famous craftsman Daedalus. His father was the creator of the Labyrinth, a huge maze located under the court of King Minos of Crete, where the Minotaur, a half-man half-bull creature lived. In order for theLabyrinth to be kept secret, Minos had then imprisoned Daedalus and Icarus in a tower above his palace. Daedalus managed to create two sets of wings for himself and his son that were made of feathers glued together with wax.

He taught Icarus how to fly but warned him not to fly too high, which would cause the wax to melt by the heat of the sun, nor too low, as the feathers would get wet with sea water. Together, they flew out of the tower towards freedom. However, Icarus soon forgot his father’s warnings, and started flying higher and higher, until the wax melted under the scorching sun. His wings dissolved causing young Icarus to fall to his fatal death and drown in the sea. The Icarian sea, located in the Mediterranean between the Cyclades islands and modern day western Turkey is alleged to be the location where he fell to his death and is thus named after him, as is a nearby island named Icaria.

At the tender age of 21, Canova was commissioned for this sculpture. As his first attempt at marble and masterpiece on that fact alone, this sculpture earned Canova great admiration as a young artist. Not only are the figures perfectly symmetrical, but also the emotions found in their facial expressions, particularly the concern in face of Daedalus contrasted with the optimistic youth and eagerness in Icarus‘ visage as he admires the wings he is about to soar with, makes us understand how Canova became the father of sculpture and the Naturalism movement. 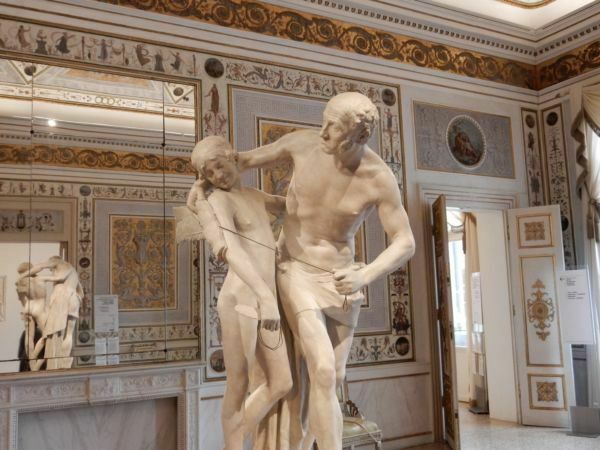 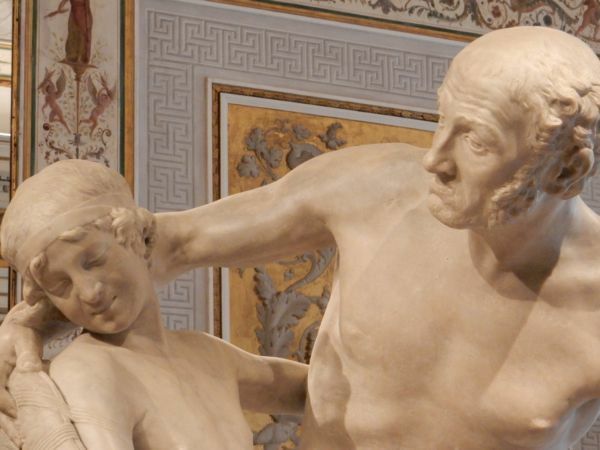 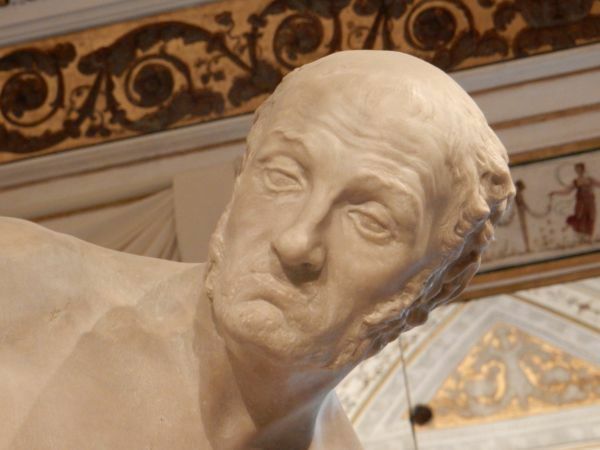 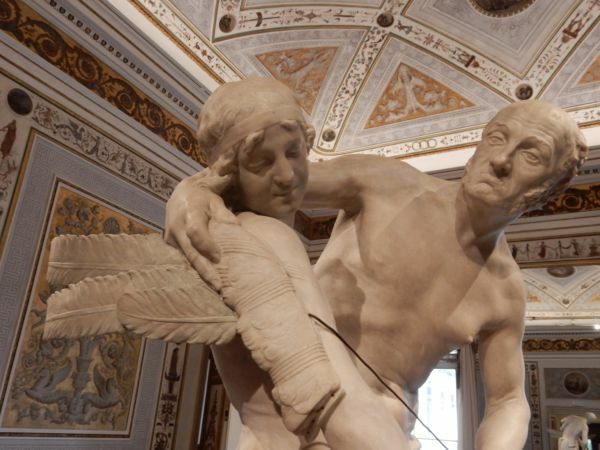 One of the most famous characters in the Greek legends, Orpheus was a poet and musician that had almost supernatural abilities to move anyone to his music. He decides to descend to the Underworld, ruled by Hades, as a living mortal to retrieve his dead wife Eurydice after she was bitten by a poisonous snake on their wedding day. With his lyre-playing skills, he was able to put a spell on the guardians of the Underworld with his music.Then, with his beautiful voice he was able to convince Hades and his wife Persephone to allow him and his wife to return to the living.

The rulers of the Underworld agreed, but under one condition – Eurydice would have to follow Orpheus  from behind as they retraced their steps back, and he could not turn around to look at her during their journey. Once Orpheus reached the entrance, he turned back, longing to look at his beautiful wife, only to watch as his wife let go of his hand and fade back into the Underworld— gone forever. He was forbidden to return to the Underworld a second time, doomed to spend his life away from his true love playing his music to the birds and the mountains.

At a tender age of 18, Canova began designing this sculpture which took him two years to finish. The most moving element of the sculpture, is the story Canova is telling with these figures made of stone. Unlike the figurines of Icarus and Daedalus above that are perfectly symmetrical and grouped closely together, here the figures are divided into two groups to emphasize the separation, distance, and ultimate loss between the lovers. The most stunning aspect of these figures is the facial expressions of the two — they look so real —  you can feel the pain and the loss as Orpheus turns back right at the gate of freedom to loose his love forever. If you look closely below, you can see a hand coming out of from the cloud behind Eurydice grabbing her wrist, to hold her from running away. As you can see in the photos below, I could have stood there for hours staring at these two and the imaging what that moment was like. 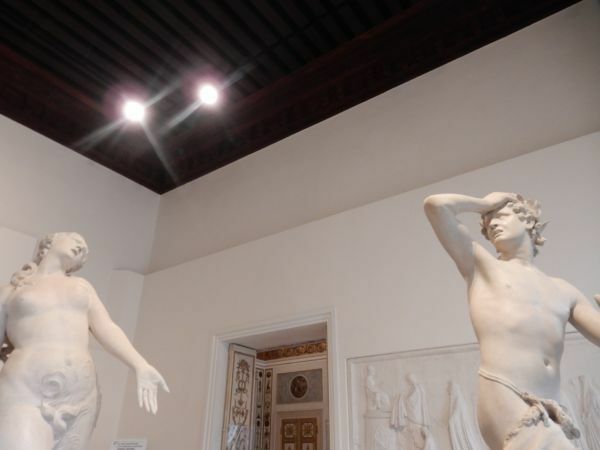 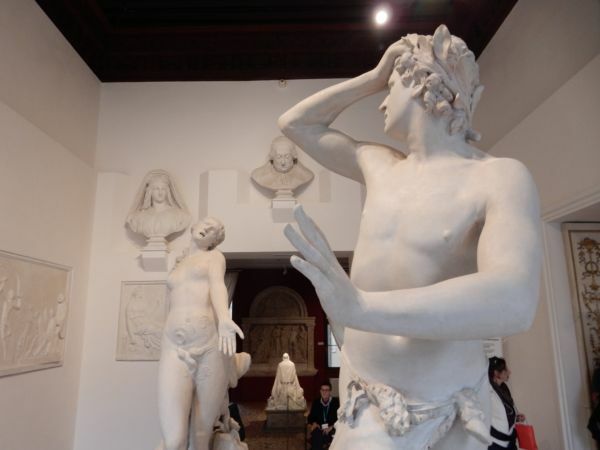 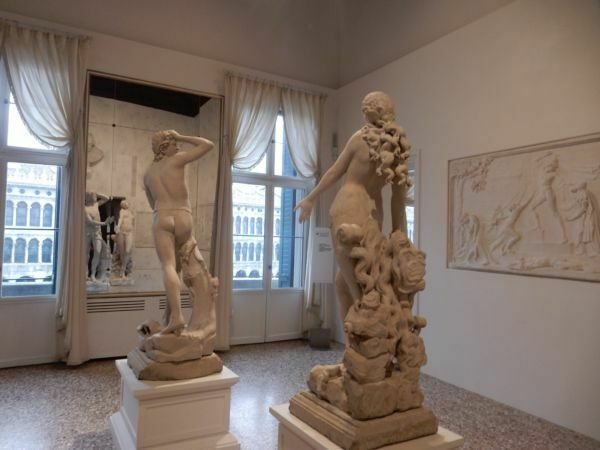 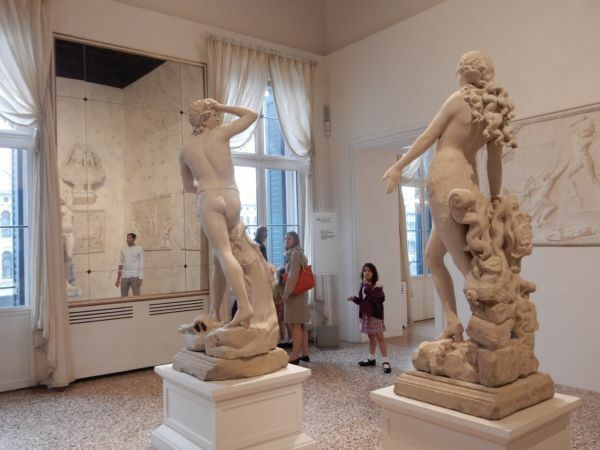 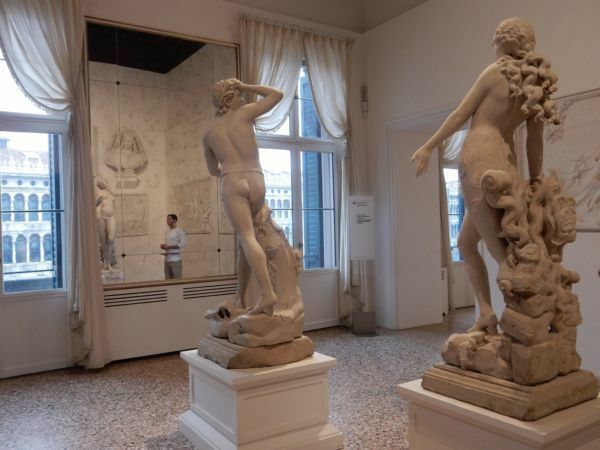 This wondrous creature needs no introduction, Venus the unparalleled Goddess of love, sex, seduction, fertility, desire, victory, and of course beauty. Revered for her unparalleled beauty, she is described as, “the most original creation of the Roman pantheon (Roman Gods).” Because she was born of the sea arising directly out of the sea foam, it makes sense that she is also here at the Correr Museum. Yet another symbol of beauty, strength, and of course protection of the city by the sea.

In another beautiful statue by Canova, we see Venus standing naked in her raw beauty. We are mesmerized first by her gaze, and then by the softness of her skin which appears almost warm to the touch if you dared to reach for it. Then you come to and remember that this is wondrous work of marble and just another fabulous example of Canova’s great work! It is so real, I promise you that when you stand there, you can touch and feel it. 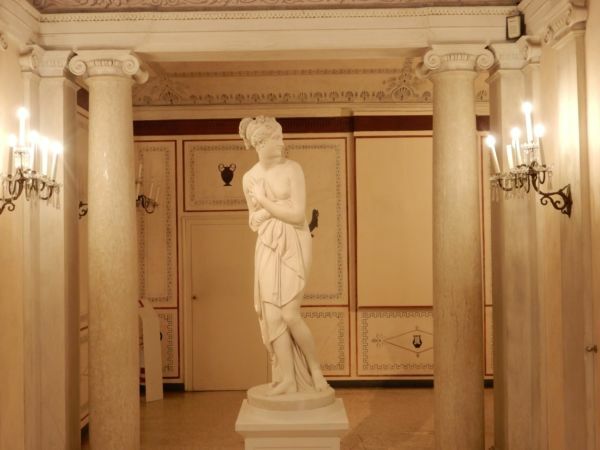 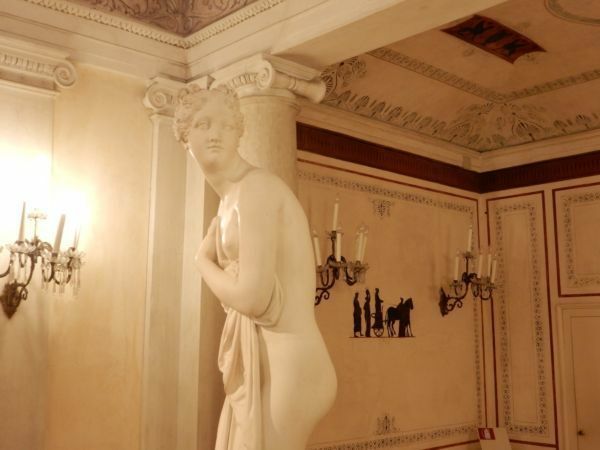 So how much time do you need to spend with the pantheon of Roman Gods?

TIP — I would recommend 1-2 hours to see all of the great sculptures in the Correr Museum.

For those like myself who are big fans of Canova, sculpture, and these legendary stories — plan to get lost for hours! Don’t forget to leave me a comment below with your answers to my questions above. I hope you enjoyed a closer look at these Roman Gods in the Correr Museum and their stories. The afternoon spent with them taught me that legends truly never die.